In October 1991 start of production at our plant in Chicopee, MA.
This location represented the first LEONI plant in the United States.
Below the article published in the local news to celebrate the event. 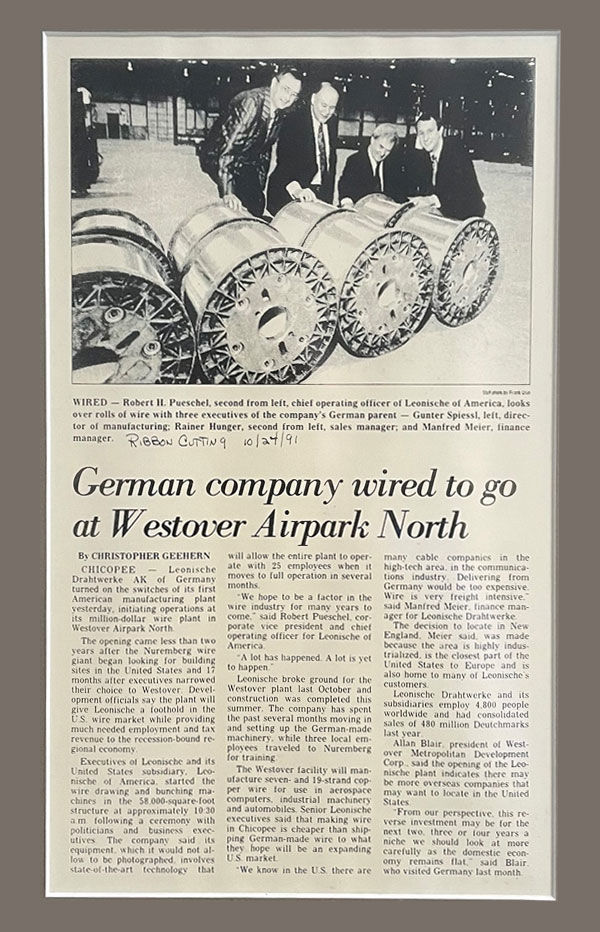 The opening came less than two years after the Nuremberg wire giant began looking for building sites in the United states and 17 months after executives narrowed their choice to Westover. Development officials say the plant will give Leonische a foothold in the U.S. wire market while providing much needed employment and tax revenue to the recession-bound regional economy.

Executives of Leonische and its United States subsidiary, Leonische of America, stated the wire drawing and bunching machines in the 58,000-square-foot structure at approximately 10:30 a.m. following a ceremony with politicians and business executives. The company said, its equipment, which it would not allow to be photographed, involves state-of-the-art technology that will allow the entire plant to operate with 25 employees when it moves to full operation in several months.

“We hope to be a factor in the wire industry for many years to come,” said Robert Pueschel, corporate vice president and chief operating officer for Leonische of America.

“A lot has happened. A lot is yet to happen.”

Leonische broke ground for the Westover plant last October and construction was completed this summer. The company has spent the past several months moving in and setting up the German-made machinery, while three local employees traveled to Nuremberg for training.

The Westover facility will manufacture seven- and 19-strand copper wire for use in aerospace computers, industrial machinery and automobiles. Senior Leonische executives said that making wire in Chicopee is cheaper than shopping German-made wire to what they hope will be an expanding U.S. market.

“We know in the U.S. there are many cable companies in the high-tech area, in the communications industry. Delivering from Germany would be too expensive. Wire is very freight intensive,” said Manfred Meier, finance manager for Leonische Drahtwerke.

The decision to locate in New England, Meier said, was made because the area is highly industrialized, is the closest part of the United States to Europe and is also home to many of Leonische’s customers.

Allan Blair, president of Westover Metropolitan Development Corp., said the opening of the Leonische plant indicates there may be more overseas companies that may want to locate in the United States.

“From our perspective, this reverse investment may be for the next two, three or four years a niche we should look at more carefully as the domestic economy remains flat,” said Blair, who visited Germany last month.